Kappa 700 and other IPGs equipped with the VCM algorithm
Original Date of Communication: July 2008

View specific models that this applies to

Medtronic Technical Services has received reports of devices going to ERI or end of life (EOL) sooner than expected after a normal follow-up in which the device longevity was projected to be approximately 18 months. It has been noted that these cases typically involve Kappa 700 devices where Ventricular Capture Management set the ventricular lead to high output (5 V, 1 ms), which occurs by device design when a high threshold is measured. It is important for physicians and allied professionals to understand VCM behavior as it relates to longevity so that they can, in turn, understand how this affects management of the device and follow-up visits as VCM equipped IPGs near the end of their expected longevity.

When ERI is declared by the device, VCM is disabled and the outputs are left at 5 V, 1 ms until the device is reprogrammed at an in-office follow-up. This increased current drain of a high output condition will speed depletion of the device, possibly resulting in the device getting to the EOL (battery voltage ≤ 2.15 V).

Please note that the following parameter changes occur when the device goes to ERI: 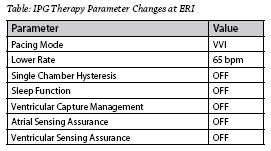 Kappa 700 is Medtronic’s first-generation VCM algorithm, which has a relatively higher incidence of evoked response undersensing compared to subsequent algorithms, resulting in more frequent high output conditions. Therefore, Kappa 700 products are the primary focus of this note. It should be noted that IPGs equipped with the second-generation VCM algorithm (Kappa 900, EnPulse, Adapta/Versa/Sensia, and Relia) have not been observed with evoked response undersensing in the general population, though the items listed in “Follow-Up Considerations” may also be used on these devices.


Specific Models This Applies To